Bodegas LAN and #WineStudio, our venture into online training

Viña Lanciano is a vineyard of great value both in terms of landscape and ecology, clearly defined by its location in a bend of the River Ebro, sheltered by the Cantabria Mountains. It is the soul of LAN and the umblical cord that links our wines to the land. We use sustainable practices based on respect for the raw material and their source.

We sought out a parcel that met certain criteria that would help us to reduce later human intervention and grow balanced plants in the most sustainable way possible and it is managed using organic farming principles.

The first organically managed parcel in the Viña Lanciano estate is barely five hectares in size and is called the “Ecological Mantible” due to its proximity to the ancient Mantible Roman bridge. It has sandy loam soil littered with small and medium-sized pebbles, which help improve the soil’s drainage capacity and optimise ripening, as the stones reflect the sunlight, allowing it to reach the lower, hidden areas of the bunches. 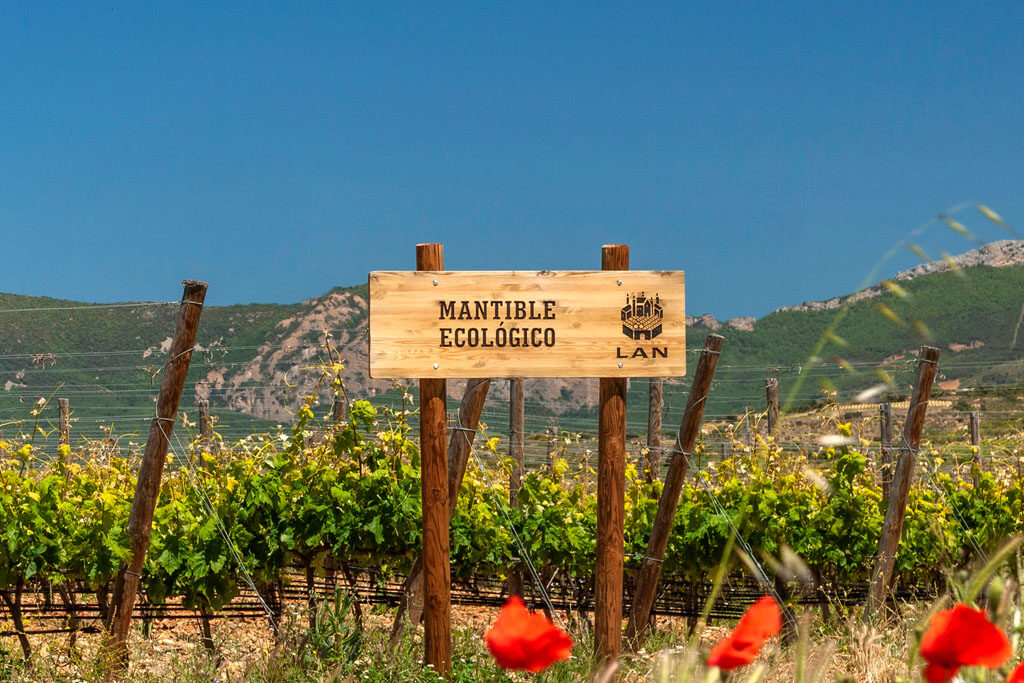 The planting in line with the terrain of the parcel, which slopes down in a west-east direction, avoids the overexposure of the plants to the sun during hot summer afternoons and allows water, fog and masses of cold air to dissipate quickly. In addition, the vines are aligned with the direction of the predominant wind in the area (the cierzo.) This great capacity for airflow speeds up the removal of humidity (such as dew during the period of ripening), reducing the occurence of mould and other diseases.

The Tempranillo grape variety stands out for having quite loose bunches, allowing greater airflow and absorbing more light. It is less affected by diseases and the ripening is optimal. The grape berries are medium-sized, high in acid when ripe with a moderate level of potential alcohol. The vines are trained on wires, allowing us to raise the bunches above the soil, protecting them from dampness and disease. The design of the trelissing structure allows the canopy to be managed effectively, ensuring that it is continuous, light and porous.

Every vintage is marked by the weather during the growing cycle. 2015 started with a winter of heavy rainfall, followed by a warm and dry spring and summer. Temperatures were milder from the second half of August, with a considerable temperature difference between day and night, which optimised polyphenolic maturation. The grapes were harvested by hand in small crates over the days of the 11th and 12th of September. And this is the result.